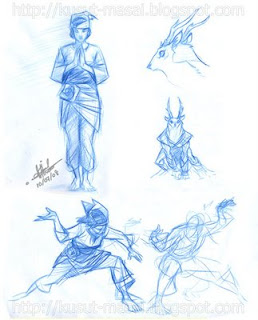 Back in the old days, Srikandi is a title given to female warriors who are well versed in the craft of Pencak Silat, a form of martial arts that is popular among Malay folks (originating from Indonesia, which then spread into neighbouring islands). It is more on the offensive side, since it was developed for war. It ranges from hand-to-hand combat, to an assortment of exotic weapons. The most popular choice of course is the keris.

In fact, there are many disciplines to Silat, and I recall a few that is especially designed for women (I remember my brother telling me the story of a princess/a woman who created the craft, and challenged that no man shall marry her unless if he could take her down. No man could).

As far as I can say, it is a serious art, especially if mixed with black magic, mainly Dabus. Nothing good can come from that (My cousin had this experience once - he got thrown across the ring by a single punch, and some of his ribs were broken during a Silat competition while sparring with a very peculiar opponent).

As for the deer creature, well... before religion, there was animism.
Posted by Mel Celestial at 4:40 AM

Use of any material/artwork within this site without permission is strictly prohibited.